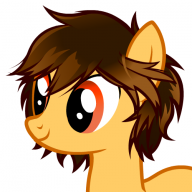 After my experiences with animation, I'm now going to take on the absolutely complicated body rig... of PONIES! http://prntscr.com/az71rp May 2, 2016